Introduced in 1995 when I was just 30 years old, metformin quickly gained traction in the medical arena as the drug of choice to use in diabetes. Prior to its introduction in the United States, it had been used in France since 1957.

It is sold globally by various different brand names and in combination with other glucose-lowering agents. Metformin has some interesting uses, as well as cautions. There are an estimated 100 million people with diabetes in our country. For natural remedies, please refer to my book, Diabetes Without Drugs, which is sold on Amazon and in book stores nationwide. You can CLICK HERE if you’d like your own copy.

Today, I’d like to share the pros and cons of the most popular diabetic medication in the world: 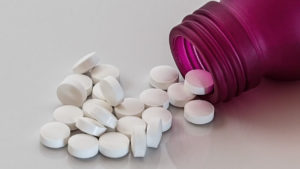 It is a strong drug mugger of vitamin B12, and the longer you take it, the more profound the deficiency. If you take metformin, the obvious solution is to supplement with B12 and/or the other B vitamins because if you take high doses of one B member, the rest of the family members become deficient, relatively speaking. So maybe a B complex is the answer.

Finding one that contains the biologically active forms of the B family members is difficult to do. If you’d like my brand, I’ve created to contain the body-ready B vitamins, and that’s why you see “riboflavin 5′ phosphate” and “pyridoxal 5′ phosphate, and methylcobalamin, 5-MTHF folate….etc..all body ready and bioavailable).

Truth is, I didn’t want to make a B vitamin at first. There are a bunch on the market, but I hated telling people during lectures (or in my syndicated column) to buy something that wasn’t easily available, and then they’d have to go buy 6 different bottles of each of the B vitamins, sometimes requiring a doctor’s visit or order… and I knew they’d be ingesting cheap garbage imported from overseas and fillers!

Now, if you simply don’t want the full range of B vitamins, and you just want one of the B vitamins that is specifically depleted by your medication, then you could take just the “methylcobalamin” (aka methylB12) all by itself. Just that one, as a single supplement, and that is easily found, and available at health food stores nationwide. But I’d like you to be careful and watch for signs of too much methylB12 and do not take it in high doses, or for too long (without a B complex) because again, you will tilt the other Bs into a state of deficiency.

Too much of any B vitamin depletes the others and causes a relative deficiency. I just proved it to myself by taking a B12 all by itself for 4 months, and my blood test last week showed elevated levels of that, and deficiencies of the other! So I’m telling you it happens.

The reason I’m suggesting methylcobalamin which is harder to find (as opposed to cyanocobalamin which is sold everywhere) is because it’s methylated providing the “methyl” group to your nerve endings. FYI, hair loss, poor memory recall, confusion, anemia, and neuropathy are signs of B12 deficiency.

In summary, metformin depletes B12, you can take it as a single entity that is widely available, or you can take it within a high-quality B complex formula that has the full range of Bs (along with methyl B12).

The results from a brand new study on prostate cancer were disappointing. It was expected that there would be some add-on benefits, but the results showed no significant clinical benefits when metformin was given along with chemotherapy. Previous results have suggested that metformin could be useful in this regard.

If you have 10 minutes, read my other article, Eat and Supplement Your Way to Better Prostate Health.

Metformin has side effects such as occasional heartburn, indigestion, bloating and gas, weight loss, diarrhea or constipation (or alternating), weird taste in the mouth that tastes metallic and rarely, pancreatitis. Sometimes taking this medication with food will alleviate most of that, and also you may become accustomed to the side effects and they may in time, be lessened. It’s individual really, no one can predict reactions or severity, and also they can change from day to day.

Speaking of side effects, sometimes you can capitalize on them. You may want to read, How to Take Advantage of Your Side Effects.

Severe lactic acidosis is a rare but very dangerous complication of metformin, and drugs in the same category. It occurs particularly in people with kidney compromise and/or failure. New RESEARCH published in the June 3rd edition of The Journal of Neuroscience has concluded that metformin improves mood and reduces anxiety. Serotonin is a neurotransmitter associated with happiness, self-confidence, satiety, and social interaction. Deficiencies of serotonin are often exhibited as OCD, depression, and anxiety. If you’d like to read about serotonin, and natural remedies for depression, take 10 minutes to read this informative article I wrote St. John’s Wort, Serotonin and Depression.

The medication may help women with PCOS, Polycystic Ovary Syndrome which is characterized by weight gain, insulin resistance, cravings, and skin discoloration. Metformin isn’t labeled for this disorder, however, we know it works. It can help reduce glucose production and suppress the liver’s production of glucose. Dosing varies for this condition, but it’s often between 3 or 4 tablets taken during the day in divided doses.

You might find this tidbit fascinating but too much DHEA in your bioidentical hormones could trigger PCOS, and metformin -a diabetes drug- can relieve it! If you’re tired and flat-lined in hormones from too much stress or caregiving, or being a workaholic, or taking cholesterol medication, then please read more about the life-giving hormone DHEA in my new article, Statins are Drug Muggers of DHEA.

Metformin may help reduce total cholesterol and low-density cholesterol (LDL) as well as blood pressure. Metformin may also reduce triglycerides according to some research. According to a STUDY
published in Diabetes Care, the diabetes drug was found to activate an enzyme in the body called AMPK (5’ AMP-activated protein kinase) and consequently reduce FADS (Fatty Acid Desaturase). This is a lot of scientific stuff to tell you about the mechanism by which LDL cholesterol is lowered by a diabetes drug!

For someone who is struggling with weight, the perk of metformin is that it has a way of reducing appetite, weight, and total fat content. No surprise here, anytime you normalize the peaks and troughs of blood sugar, your cravings become more manageable.

Metformin may suppress growth and improve immune function. It works by lowering blood sugar, which then improves cell receptor sensitivity (and number), which in turn controls the amount of blood sugar floating around in the bloodstream. This is good because tumors and pathogens (ie fungi, viruses, and bacteria) all feed on glucose, so if the sugar gets pushed into the cell then there’s less fuel to feed the pathogens and growing cells that went rogue.