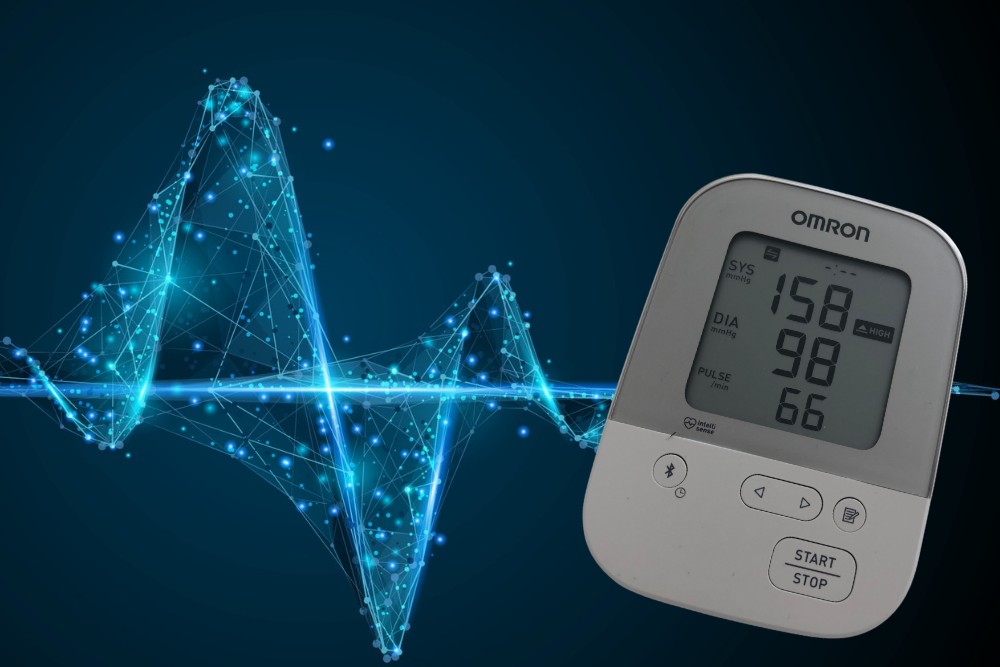 Being sedentary will raise your blood pressure according to this STUDY. There are actually lots of studies on this topic, and one published in August 2021 came across my desk. Researchers evaluated 28 older women with hypertension and made them exercise. They compared the results to 17 other women who maintained their normal (sedentary) lifestyle and did not exercise. They had them exercising routinely for nine months and their blood pressure numbers improved. Then they had them rest without any kind of training, and their markers all went to pot! Essentially, exercise helped to reduce both systolic and diastolic pressures, as well as resting heart rate but after sitting around, there were no longer any benefits.

It’s not like we had to have a study to know this, but the topic of maintaining healthy blood pressure reminded me of another story I want to share with you today.

A new acquaintance of mine mentioned he takes this popular medication for his blood pressure (and only that), and it concerned me because prescribers today should already know that this particular drug is not super useful!

There was a study like 16 years ago showing it worked no better than a dud pill!!! 🤷‍♀️

🤔  So I went home and looked up statistics on said drug (which you can read about HERE) and shockingly, it showed that 18 million prescriptions were written for it in the year 2019!  (We don’t have 2020 stats in, but my point is millions of scripts are still written for patients even though a landmark Lancet study show it doesn’t work). 😳

You might be wondering if I told my new friend anything about his medication or not. I thought about it because I do not like inserting myself in someone’s care, nor do I like planting seeds of doubt about a treatment that someone thinks is useful because the mind is a powerful thing! I called him later, and asked him if his doctor (and he) were happy with his blood pressure numbers and he said “no” so at that point, I asked if I could email him a study link about his medication, and also if he was open-minded to other medications and/or herbal remedies. With a resounding “yes” I proceeded to help him. He asked for help.

Another reason is I “inserted” myself into his care is I have trouble sleeping at night if I don’t at least TRY to help someone, and it didn’t sit well with me that he could have a stroke or heart attack one day, and as a licensed practitioner, I didn’t even bother to try to help him! So today’s article is one I’d like you to share. I simply want to do the same courtesy for you today, in case you too are taking a pill that works as well as a sugar cube! 🙄 That said, there are big corporations that read my content… and watch me…and everything I say about medications, and being totally honest, I do get nervous when I write negative (albeit factual) data about popular pharmaceuticals… still I feel you deserve to make your own informed decisions about things.

Here’s the STUDY LINK and the drug’s chemical (generic) name is atenolol and the study was published ages ago in the year 2004. That’s how long this data has been out. It caused the drug to fall from grace at least by most standards. Here’s another ARTICLE about the same topic.

I wonder for what purpose are people taking it since it’s not ideal as a stand-alone for hypertension?

Maybe you are taking it for an off-label indication such as migraine or ANXIETY. The drug is also effective if used to relieve minor chest pain (angina) and also, it does help with essential tremors which some people with Parkinson’s have.

Some research indicates that if atenolol is used in combination with another medication for hypertension, then it could be useful. More modern treatments include ACE (angiotensin-converting enzyme) inhibitors like enalapril, and even more modern, the ARB drugs like candesartan and losartan. There is the category of Calcium Channel Blockers too, drugs such as amlodipine, or nifidepine.

Doctors sometimes use diuretics to reduce fluid volume in the body and these work via your kidneys. There are many agents today, and your doctor selects the best drug for you based upon your specific medical problem, age, kidney/heart function and even your RACE.

Beta Blockers.
Atenolol (and also propranolol) belong to the larger category of beta blockers. These drugs have a mild impact on your cells and keep them from taking up potassium to a small extent. In combination with potassium-sparing diuretics, the result may cause excessive potassium in the blood, a condition known as hyperkalemia. So to keep you safe, I recommend you avoid over-the-counter potassium supplements unless your doctor says otherwise (while taking beta blocker drugs of course).

And since millions of people use beta blockers (atenolol and propranolol and others), these are what I call “drug muggers” of CoQ10. You manufacture CoQ10 in your liver.  Some of the beta blocker side effects may be relieved by taking a little bit of CoQ10 each day. CoQ10 is a naturally produced antioxidant, and most of this compound resides in your heart cells. It’s good ‘food’ for your entire cardiovascular system. If you take a beta blocker, my recommendation would be 100mg CoQ10 each day, or better yet, 50 mg of the more biologically active form called Ubiquinol. Either way, this may help you to stay on your prescribed medication because the CoQ10 will help alleviate some of the well-documented side effects of the drug. Do not discontinue your medication as it has some positive applications. Furthermore, please ask your physician what is right for you if you’d like to add the CoQ10.

This category of drugs may deplete melatonin as well, though it takes a few months or years to do this. The drugs are known for causing sleep disturbances, vivid nightmares, bad dreams and chronic insomnia, perhaps through the melatonin drug mugging effect.

Lifestyle Factors Play a Role.
As for lifestyle options, there’s a brand new STUDY from India that proves yoga and meditation work to reduce blood pressure. This is not the first one either. Calming the body down, and breathing deeply help so much so, many participants were able to reduce the dose of their conventional medicine (33%) and some could actually discontinue it altogether after about 6 months!

Herbal Medicine and Diet.
I’ve written another ARTICLE  on the topic of blood pressure and natural remedies. I also have a hawthorne recipe for a blood pressure tea that you can make which will help control those numbers! Check it out HERE.

Prunes are useful, they’re not just for regular bowels like you might assume. The little crinkly fruits help with bones and with blood pressure. Read this ARTICLE to learn more.

Finally, if you have the condition POTS (postural orthostatic tachycardia syndrome), this ARTICLE about salt, and adrenal glands will be of interest to you.

New Research on Hypertension and Natural Remedies.
There is another popular anti-hypertensive medication on the market called “amlodipine” which goes by the brand name of Norvasc® and this drug is completely unrelated to atenolol. It’s another agent altogether. A new study entitled, Effect of Co-Administration of Curcumin with Amlodipine in Hypertension suggests that curcumin may enhance the vasodilatory effect of it which is great news for people who like Thai or Indian cuisine – often rich in turmeric. There are supplements of curcumin widely available at health food stores nationwide – ask your doctor if its right for you.

Finally, there’s a plant called “Longevity Spinach” and it is not the type of spinach you are thinking of. Botanically it is known as Gynura procumbens and this tropical herb is native to Asian countries (Vietnam, Malaysia, Thailand, etc) as well as some African countries. This ‘spinach’ suppressed inflammatory cytokines and improved wound healing in otherwise non-healing wounds as shown in this new ANIMAL MODEL. The results suggest that herbal extracts of it can reduce blood pressure. Pharmacological actions and anti-hypertensive and cardioprotective benefits are discussed in this ARTICLE.

Last but not least, I want to emphasize that you need to keep your cardiologist in the loop when dealing with matters of the cardiovascular system. Blood pressure elevations do not happen overnight, they are the symptom of another disease. For example, the symptom of elevated systolic pressure may be the result of aortic insufficiency, regurgitation or it may be related to a medication you take. Since I wrote about Small Fiber Neuropathy I’ve been studying more about IVIG, a therapy that is known to help with that condition, and as it turns out, this medication may raise blood pressure. Just knowing the cause for the increase in your blood pressure can help you and your doctor pinpoint the exact remedy that is useful to you. In the case of IVIG, the drug’s side effect thickens blood so a blood thinner can be helpful in this instance because it reduces the risk of blood clot formation. Something like fish oil supplements and nattokinase, or aspirin (or even white willow bark according to this PAPER) which may be very helpful in this regard to keep your blood thin and act like a natural anti-thrombotic agent. Herbs are not a substitute for medication I have to tell you this. And furthermore: Doctors can prescribe medications for you such as warfarin and many others to help with blood thinning.

Systolic blood pressure (the first number) is expected to be high if you’re exercising, it should not be high at rest. Diastolic pressure (the second number) is the pressure that your blood is exerting on your vessels at rest (in between heart beats). These numbers change constantly, and the expected normal values for you will differ according to your age. As you get older, the range changes for what is “normal.” Prior to 2017, when guidelines changed, the blood pressure range made allowances for people who were older, who often had slightly higher diastolic and systolic numbers (but no heart disease)… BP tends to go up as one ages, it doesn’t necessarily mean you need medication or treatments. Diet and exercise can be helpful. If you’re interested in self monitoring your blood pressure at home, you can try these devices that are sold on AMAZON.  Here’s one and here’s the other one I like.

But in 2017, the thresholds were reduced. According to Harvard Health’s website, the 2017 guidelines that came down from the American Heart Association in conjunction with the American College of Cardiology, and 9 other organizations, the reduced numbers meant that MORE adults would suddenly be diagnosed with having “hypertension.” And as you can surmise, the population that would be categorized as such would be much younger than in previous years, with previous (more relaxed) guidelines. Now, in 2021, millions of more people require medication therapy. lowered the numbers for the diagnosis of hypertension (high blood pressure) to 130/80 millimeters of mercury (mm Hg) and higher for all adults. The previous guidelines set the threshold at 140/90 mm Hg for people younger than age 65 and 150/80 mm Hg for those ages 65 and older.

Up to 79% of men that are 55 years of age and older are now classified as having hypertension! That includes many guys whose blood pressure had previously been considered perfect. I’ve taken a graphic from their WEBSITE so you can see where you fall according to current guidelines and read more information there.

Make sure you are working with a qualified professional to make appropriate changes to your diet, lifestyle and medication regimen.